The new PS 150 has two rooftop play areas. This was built on top of a landmark in the city, the Robert and Anne Dickey House from 1810. The interior of this building is connected to the part of the school which is at the foot of 77 Greenwich Street, a residential tower. Photo: Carl Glassman/Tribeca Trib

“You are the very first class in the history of the universe to have a class in this room,” music teacher Tony Kunin told 3rd graders who had just taken their place in his class on Thursday, the first day of school. “If you’re excited about it, give the thumbs up.”

Needless to say all thumbs up. And indeed, there were many more kudos, from teachers, parents and students, for this brand new, 8-story, $104 million building that now houses the tiny PS 150, from kindergarten to the 5th grade (and before K-2) which had occupied a two-story annex on the third floor of Tribeca’s Independence Plaza apartment complex since 1988. 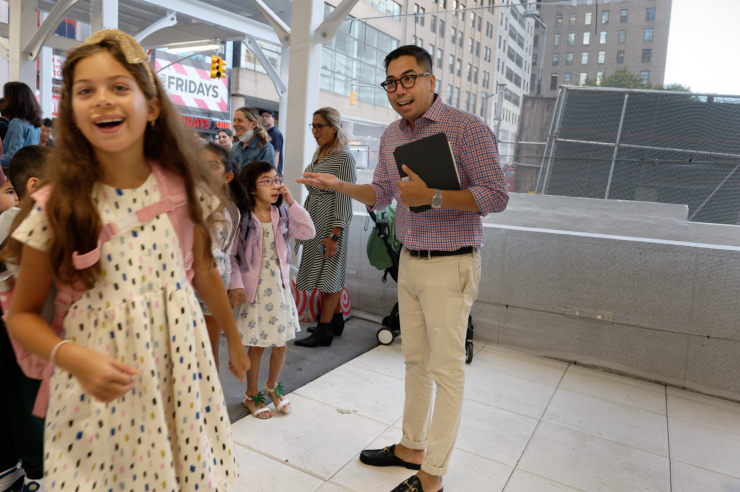 The school, located at 28-42 Trinity Place, is part of the 500-foot condominium tower located at 77 Greenwich Street, between Rector and Edgar streets, and includes the adjacent, freshly restored 1810 Robert and Anne Dickey House, a landmark of the city. Work continues on the condo, so scaffolding and netting now hangs above the sidewalk where the kids will eventually congregate for arrival and departure.

The building has two rooftop recreational spaces, a combined gymnasium and auditorium, and a “multipurpose” room with a stage that can also be used as an auditorium. There’s a science lab, an art room, a library with thousands of new books and Kunin Soundproof Music Room, as well as a spacious teachers’ lounge, offices for counselors and much more. Hallway windows offer views of New York Harbor, Battery Park, and across Edgar Street, Elizabeth Berger Plaza. For the first time, PS 150 students will eat in a real cafeteria, and a large and well-equipped one too.

“I think I’m most excited about a cafeteria,” kindergarten teacher Marcie Jacobson said with a laugh. “Lunch was difficult.” 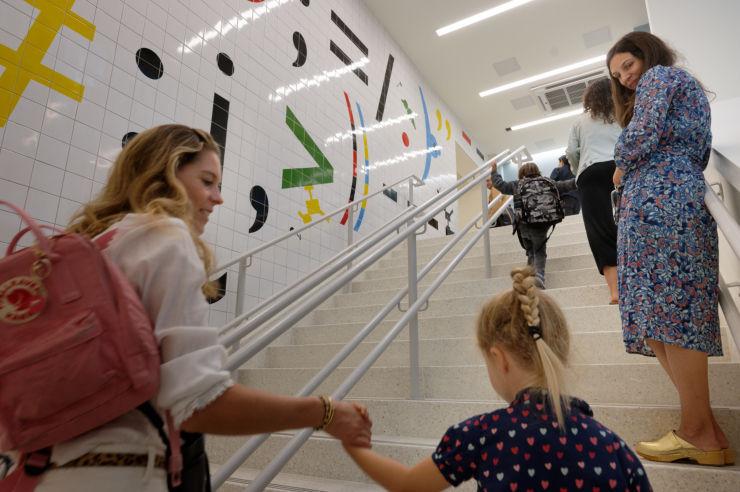 In the old building, students ate lunch either in their classroom or at cafeteria tables in the music room. The teachers ate in what was part lecture hall, part copy machine, part storage room.

“It’s so nice that the kids have a space – and there’s so much space – and it’s a beautiful room, and the amount of food that’s going to be in there!” said Jacobson. “There’s going to be a salad bar. So many different choices for them.

Old and current school buildings are so different that they defy comparison.

“It’s hard to understand,” said principal Nico Victorino, 37, who is entering his second year at the school after eight years as vice principal at PS/IS 276 in Battery Park City.

Fifth-grade student Gabriel Statescu said the new building looks more like a middle school, even a high school. “It has eight floors,” he said. “It’s just crazy for me.” 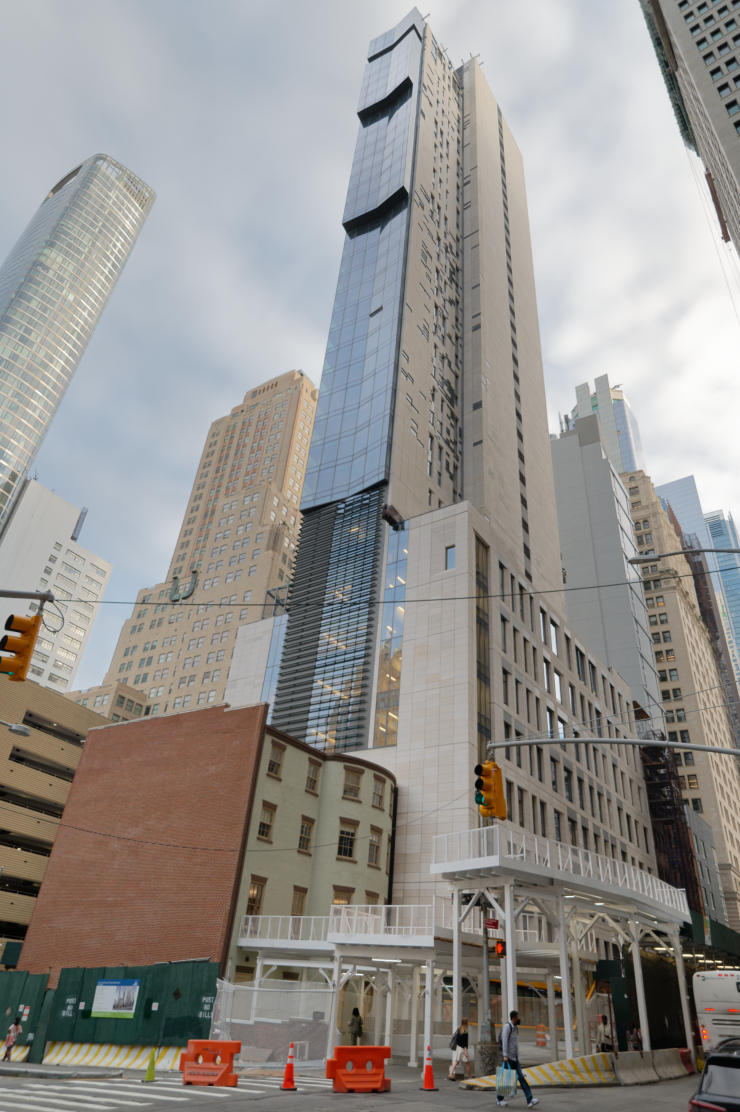 Not counting grades 3-k and pre-k, the school has only 161 enrollment left. Starting with two kindergarten classes and one class per 1st through 5th grade, the school aims to add one class each year until enrollment eventually reaches three classes per class. For now, the rooms are empty. One is intended as a computer lab, another just for chess. Yet another will be a dedicated reading room.

Since last summer, Victorino said, he’s spent much of his first year planning the massive move. During an interview in the building, a week before the first day of school, and only a week after the building received its temporary occupancy certificate, workers were everywhere preparing for the installation. (On the first day of school, the cafeteria kitchen was without gas, and Anna Guereros, who is in charge of the cafeteria, prepared lunch that morning at another school.) 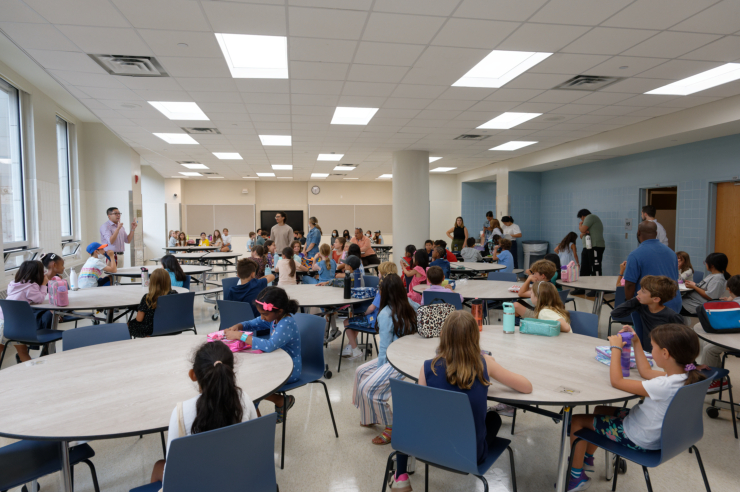 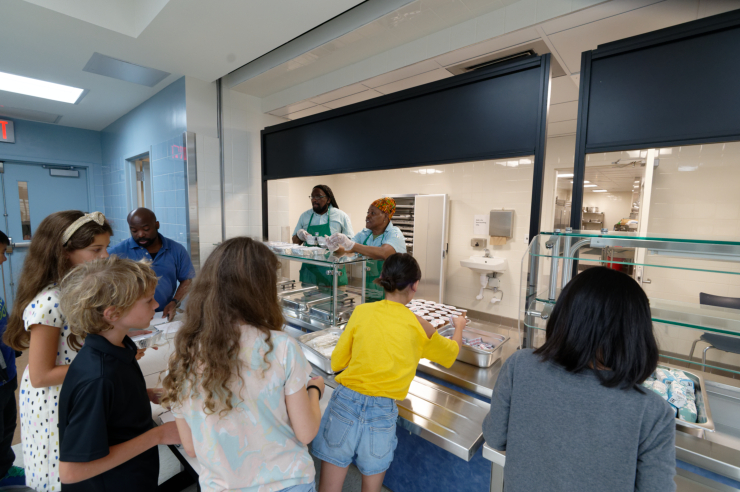 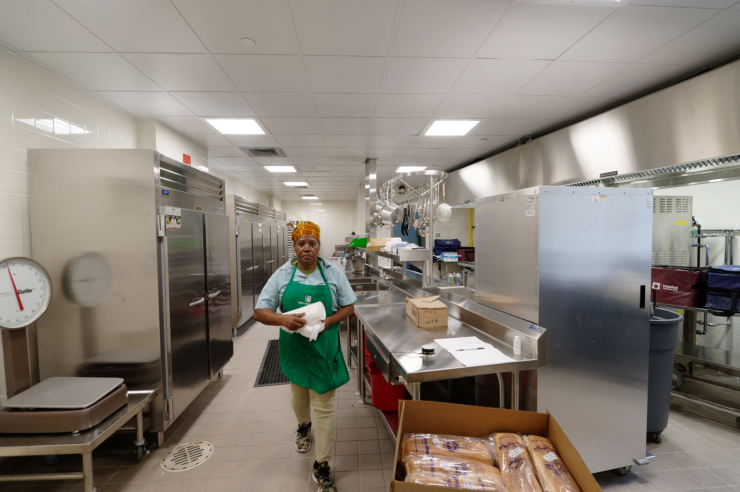 “Over the past couple of months it’s been stressful dealing with everything on the old site,” Victorino said. “The new building was not ready to receive all the materials, so they were put in storage. Delivery is still in progress. »

“Packing was a nightmare as we had to do it while school was in progress. We lived with boxes everywhere,” said Christine Walford, school secretary since 1994. “It was tough. But it was worth it.”

Laura Cohen, who serves as both parent coordinator and school librarian, pointed to boxes full of books from the old building – 6,000 to 7,000, she estimated. They still had to be unboxed and assessed for racial sensitivity. In November, Cohen thought she would be done. She said she wanted to distribute the books so they weren’t just in the library and classrooms. “We’re going to have libraries everywhere,” she said 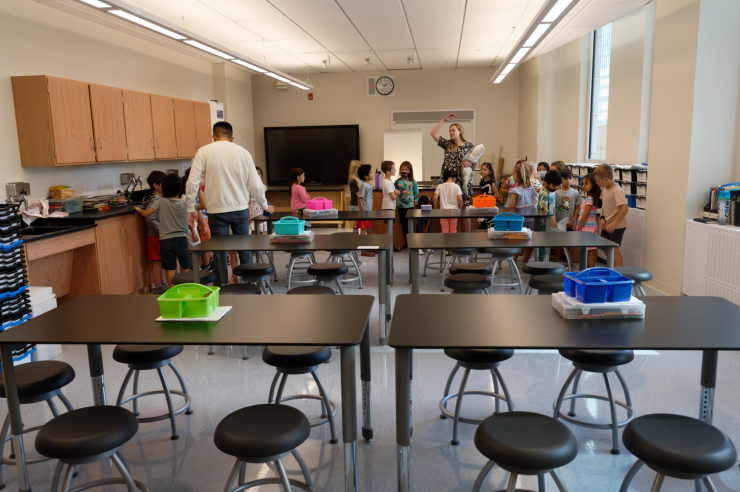 The move from Tribeca to the Financial District is the final chapter in the school’s history which began in 1988 as the Early Childhood Center, a pre-K through 2nd grade. ECC, as it was known, opened when the first tenant of the Independence Plaza annex, Independence School, became PS 234 and moved into its own building on Greenwich Street. (The Independence School began in 1976 to largely serve the few children at the newly opened complex.)

Converted to a K-5 class per class in September 2001, local parents continued to choose the unzoned PS 150 as a more comfortable alternative to Tribeca’s fast-growing PS 234. In 2013 they successfully fought a Department of Education plan to move students to a new school on West 17th Street, zoned for Village and Chelsea children. (The DOE plan opposed parents versus teacherswho almost all supported him.) Five years later, parents protested a DOE proposal to integrate the PS 150 community into the Peck Slip School after Independence Plaza owner Vornado refused to extend the school’s lease beyond the 2018-19 school year In progress. Mayor Bill de Blasio interceded with Vornado CEO Stephen Roth and the school received a reprieve from eviction until the new building on Trinity Place opens. 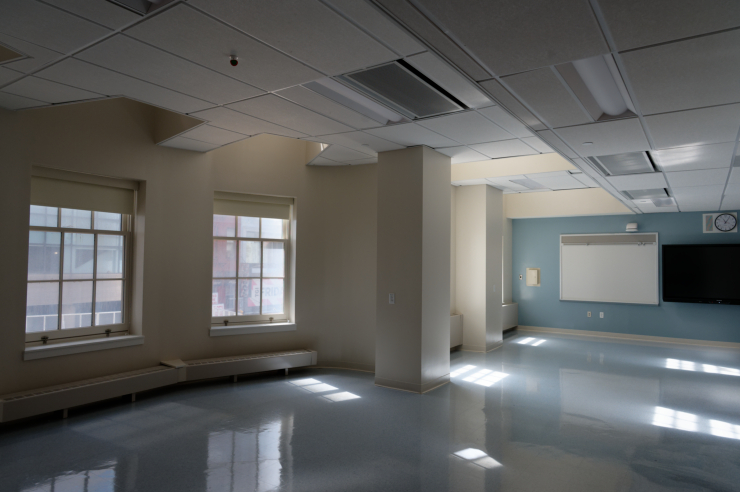 “We all loved the other location. But we knew it was going to end. said Raphaela Logullo, the mother of a 3rd grader PS 150 and a 7th grader who also attended the school. “We were lucky twice to be able to extend the lease.” (Victorino said almost all of the parents chose to continue sending their children to PS 150 rather than their zone schools, including PS 234. All but one of the teachers also returned.)

Even amid the excitement of the new high-end facility, for some the small school building — not to mention its convenience for Tribeca parents — isn’t easy to leave behind.

Victorino said there were “cultural aspects” from the little old school that he does not want to lose in “This gigantic, beautiful, brand new school.” 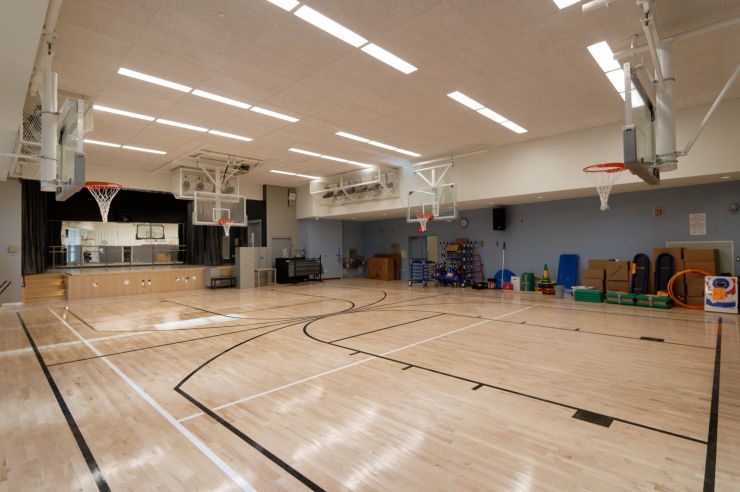 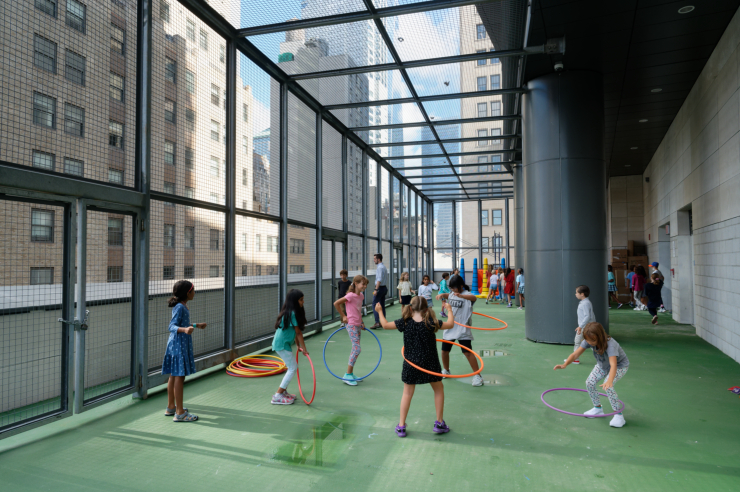 “My biggest concern is to have a really strong grassroots community, a strong school culture,” he said. “Teachers are proud to work here. Parents are proud to send their children there. How can I maintain this as we grow? I think it’s a big challenge this year.

If the city allows it, Victorino added, he would like to see the school grow as slowly as possible “to try to maintain that strong sense of community. If we grow too fast, it becomes harder to focus on that. 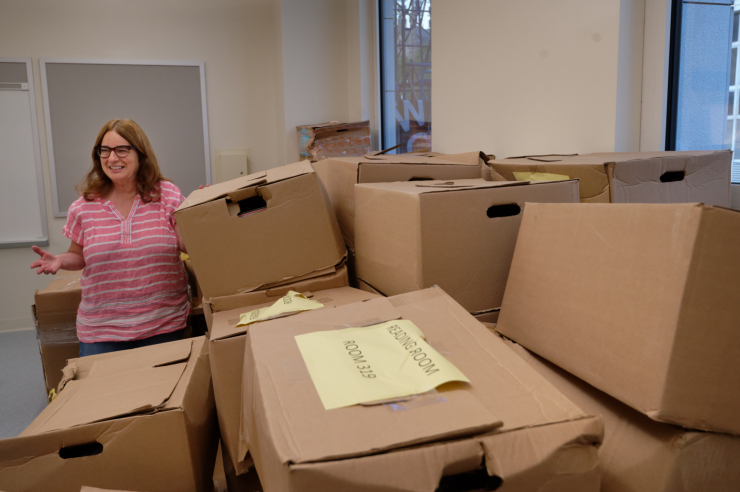 The move to the new building “is very bittersweet in the sense that we have such a big space,” said Wendy Liu, a first-grade teacher, who is entering her sixth year at the school and her 11th as a teacher. “I’m excited about the space, but I miss the old one because everyone was so much closer. But I think as we get more kids in the hallways, we’ll get that feeling back. .

“The vibe of home is what you make it,” she added.

PS 150 teachers said a downside to the PS 150 at one class per year was the absence of colleagues sharing the same level, an issue that arose when teachers backed the DOE’s proposed move to Chelsea . Now, as the school grows, said Grade 5 teacher Parija Desai, “we will have the opportunity to collaborate with another Grade 5 class, and the arrival of new staff members is always exciting. “

For now, the school seems eerily quiet and empty, and some teachers are reportedly worried about how the school will fill its empty rooms. But Lenmara Ametova, the school nurse, seemed to relish her three-room office, the largest of which was still bare. Cheerfully showing a visitor around, she stood in the middle of this room, spread her arms and smiled. “I am the queen of the 6th floor! ” she says. 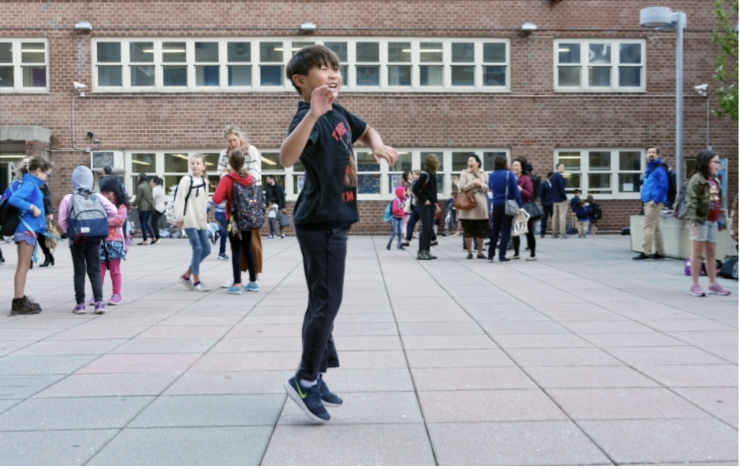